Our team has been doing extensive research on how the weather pattern may evolve heading into the winter.  This blog will give you a “behind the scenes” look at our research and preliminary thoughts.  We will be hosting a FREE winter outlook webinar on September 19th at 2pm, and you do not want to miss it!  All you need to do is sign-up at this link: bamwx.com/webinar

We will briefly discuss some of the bigger pattern drivers we are looking at to come up with analog years – years that featured similar atmospheric conditions as we are facing currently for clues on what the upcoming winter may hold.

The oceans play a major role in how weather patterns behave across the globe.  You have likely heard of El Nino and La Nina, which are phases of the El Nino Southern Oscillation (ENSO).  These phases are derived from sea surface temperatures and trade wind patterns in the east-central equatorial Pacific.  When waters in this region are warmer than normal (>0.5ºC) it is referred to as an El Nino event.  When the ocean temperatures in this region are colder than normal (<0.5ºC) it is a La Nina event.  This year, the ENSO phase has been neutral to border-line weak La Nina, continuing to trend downward into a weak La Nina state.

Here is a look at model forecasts of ENSO heading into the next several months.  Expecting an overall weak La Nina look as we go through the upcoming winter season. (~-0.7).  More info will be revealed in our webinar: bamwx.com/webinar. 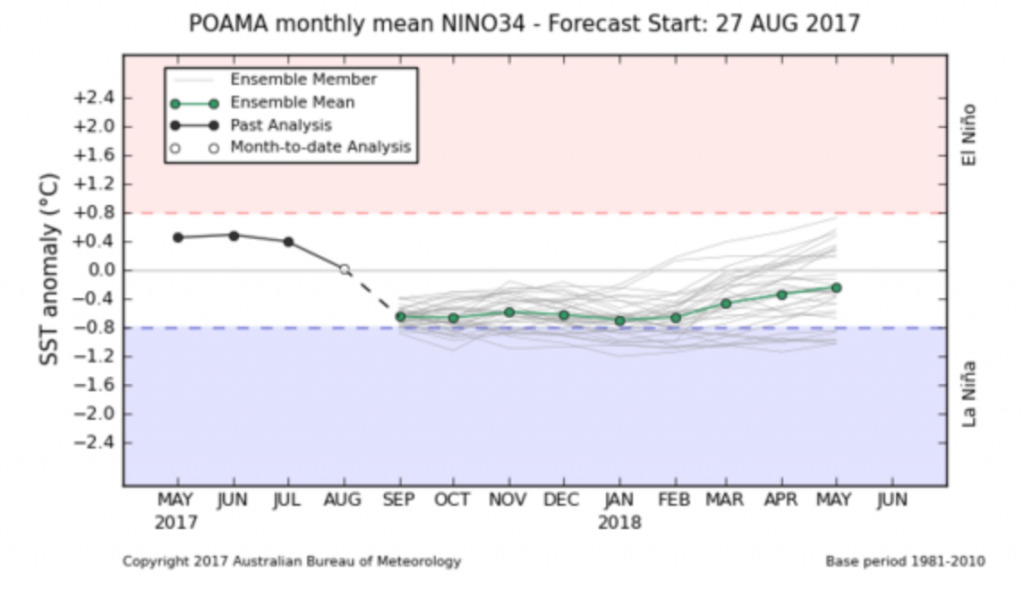 The QBO is an oscillation of the equatorial zonal winds in the stratosphere, which oscillates from a negative (easterly) phase to a positive (westerly) phase roughly every 13 months.  When this phase is negative, it often results in more sudden stratospheric warming events that displace the polar vortex and send arctic shots of air into the mid-latitudes.  When the QBO is positive, the polar vortex tends to be stronger which usually leads to less intrusions of arctic air into North America.  The current QBO is trending downward and is moderately negative.  The QBO is forecast to be moderate to strongly negative this upcoming winter.  Last year, the QBO was strongly positive, which likely played a role in the warm winter.  That said, a negative QBO alone does not guarantee a cold winter if other factors don’t line up. 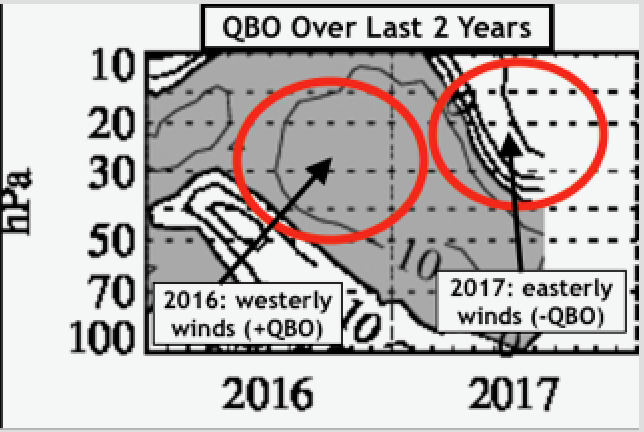 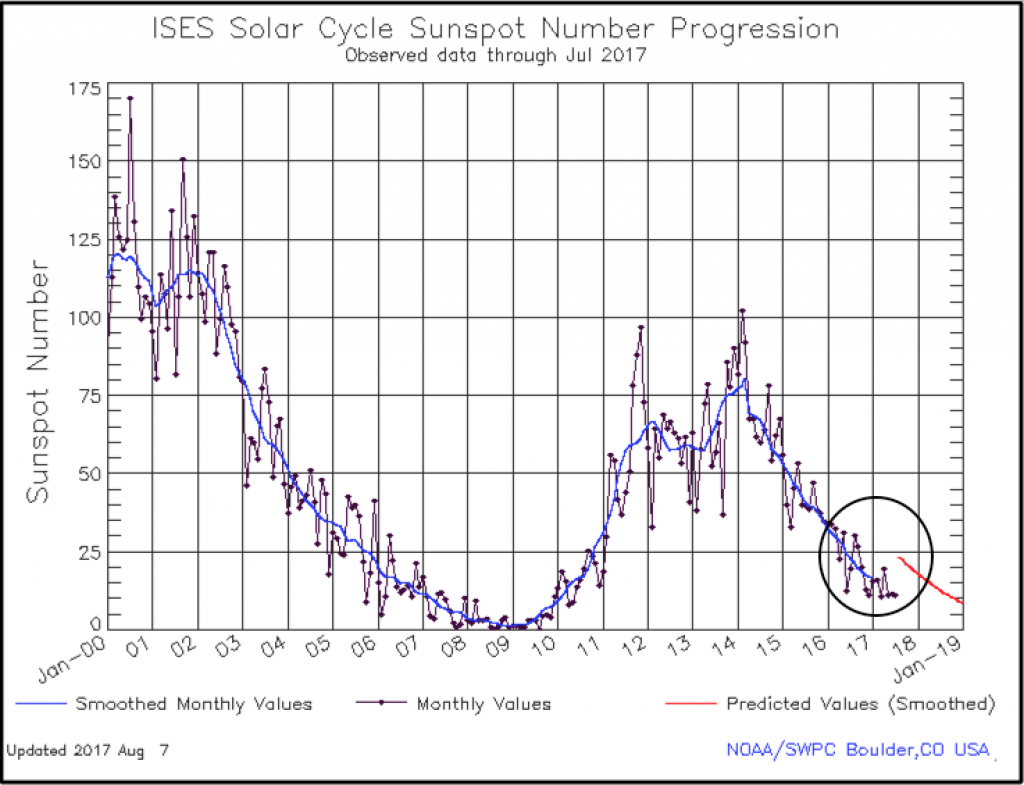 Here is a look at what years with the closest match to current atmospheric conditions produced across the U.S. in regards to temperatures and precipitation from normal in December-February.

Here is our preliminary idea on temperatures this upcoming winter based on our research: 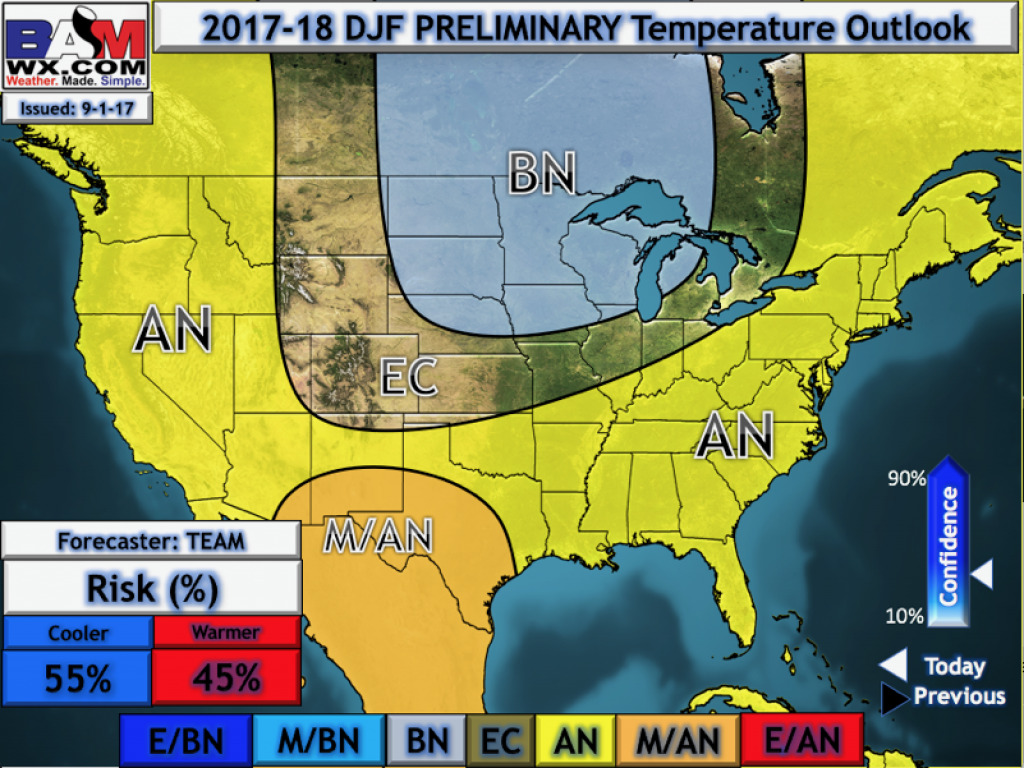 Much more information will be revealed in our FREE winter webinar on Tuesday, September 19th at 2pm.  To view our webinar, you need to make sure you sign-up here: bamwx.com/webinar.  Have a blessed day!